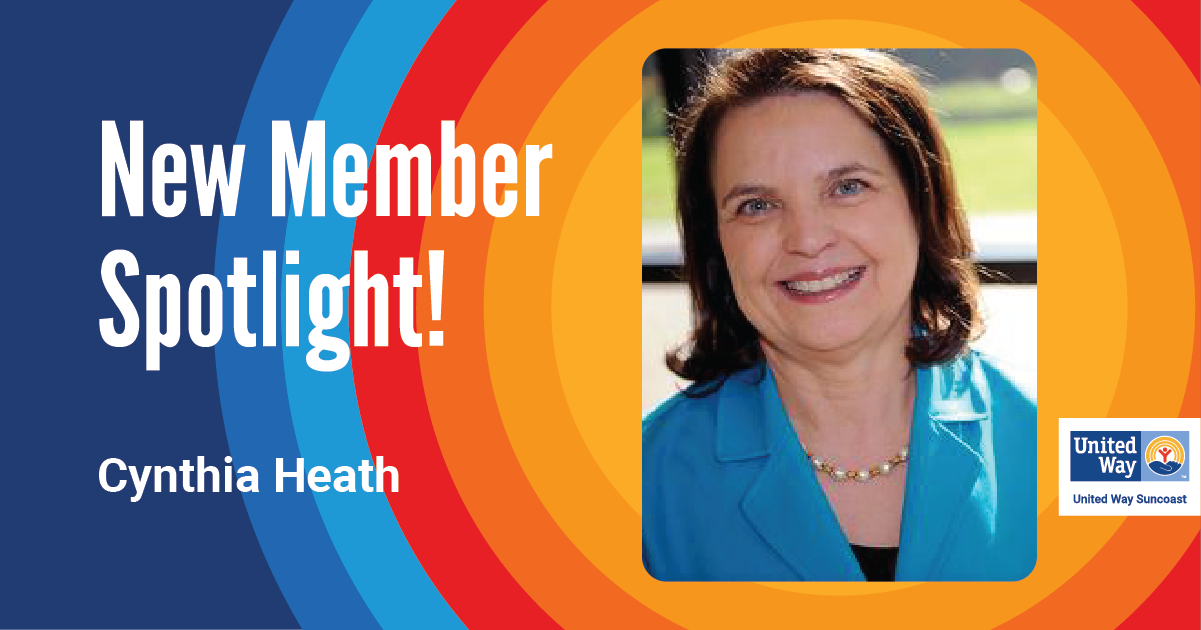 While we often think of community as the place we call home, communities are created when we connect and build relationships with others who share our values and goals regardless of where we live. United Way’s work across the Suncoast region, a desire to support that work and a family connection to the Tampa Bay area are what brought Missouri resident Cynthia Heath to United Way Suncoast and we’re pleased to welcome her to our Alexis de Tocqueville Society.

Born in Eskdale, a coal-mining town in West Virginia, life seemed normal enough. “I never really understood how poor we were because almost everyone in those hills and hollers were in the same economic status,” Cynthia said. A move to Topeka when she was ten years old brought her close to Washburn University which would play a significant role in her life.

A national champion gymnast, Cynthia graduated from Washburn University with a degree in history
and went on to teach and coach at Topeka West High School. She earned a master’s degree from Kansas State University and a juris doctor from Washington University in St. Louis, Missouri. Six years practicing law at a private firm in St. Louis was followed by a 28-year career as vice president of executive compensation at Emerson Electric Co. where she was responsible for worldwide compensation of Emerson’s top executives. She continued to consult for Emerson as a senior advisor until the end of 2018.

For Cynthia and her late husband David, giving back to their community was an important part of their lives as they raised their two daughters and pursued their careers. A current Tocqueville Society member of United Way of Greater St. Louis, Cynthia also serves as board chair of the Girl Scouts of Eastern Missouri and seeing the impact that education had on her own life, she uses her philanthropy to encourage others to give as well. With that in mind, she funded the Cynthia Heath Women’s Law Initiative Scholarship Challenge to support law students at Washington University in St. Louis. She also served as chair of the Washburn University Foundation Board of Trustees where her $1 million matching gift reinvigorated the building campaign at Washburn’s School of Law.

For Cynthia, United Way Suncoast’s focus on improving the lives of the ALICE (Asset Limited, Income Constrained, Employed) population in the region directly supports United Way’s mission and her personal philanthropic interests. By addressing access to quality education, removing barriers to financial stability and providing help during times of crisis, United Way Suncoast is bringing hope to the hopeless and transforming lives. Valuing this work and with her daughter, son-in-law and two grandchildren living in the Tampa Bay area, she was pleased to join our United Way family. “I consider the cities where my children and grandchildren live to be my communities as well,” she said. “If I can help their communities thrive, then my family will have more opportunities to thrive. Also, I like to give where I know my dollars can make a direct impact.”

We’re pleased to welcome Cynthia Heath to our United Way Suncoast Tocqueville Society, we’re grateful for her generous support and we’re so glad she’s become part of our community.

Ask Donna Drackett to describe herself and she’ll tell you she’s a mother, wife, daughter…

Sign up to receive news and updates from United Way Suncoast