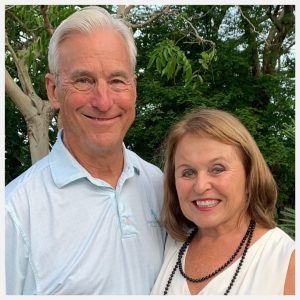 For many longtime United Way supporters, their involvement with United Way and the Alexis de Tocqueville Society is a connection that continues even as they move to new communities. That’s been the case for Bart and Elaine Boyer and we’re pleased to welcome them to our United Way Suncoast family.

Their life together began more than forty years ago after each had finished college. After three years in the U.S. Army as an air traffic controller, Bart went back to college in 1969 and received his business degree from Arizona State University.

Elaine’s post-secondary education brought her to the University of Wisconsin where she majored in physical therapy. Following graduation, they each found themselves in Minneapolis, Minnesota where they met and they have now been married for 43 years.

While in Asheville, Bart and Elaine became active supporters of their local United Way and their personal commitment to philanthropy was incorporated into the business culture at Parsec Financial as well where it continues to be a fundamental value of the company. The Parsec Prize, a charitable giving initiative, was established in 2005 to help local nonprofit organizations and since that time, Parsec Financial has awarded grants totaling more than $1.5 million to 84 local nonprofit organizations.

As Bart and Elaine noted, “We like to focus on education and economic development, both domestic and international. Of course, United Way is our preference for a broad diversity of local giving and community support.”

Today, Bart continues as chairman of Parsec and with four children, two granddaughters and three grandsons on the way, Bart and Elaine enjoy time with family and opportunities for travel.

“We divide our time between Lake Toxaway, North Carolina and Peninsula Papagayo, Costa Rica,” they shared. And they recently became Floridians as well. “After searching all over Florida for several years, we chose Longboat Key and love it,” they said. “And we very much look forward to meeting all of you!”

We’re grateful to Bart and Elaine for their generous support and we’re pleased to welcome them to Florida and to our United Way Suncoast Tocqueville Society.