A look at those left behind by the economy

While a humming investment environment and bubbling property values have helped restore financial stability to millions of Americans in the last decade, one sector — including many who don’t own stocks or homes — has continued to miss out on the relief that the long economic recovery has brought.

The latest in a series of reports bringing attention to the plight of Florida’s working families shows a stubborn resistance to improvement in their ability to survive on what they make.

The reason: While the number of jobs has grown statewide since the Great Recession, wages have not risen in tandem with basic expenses.

The result: 46 percent of Florida households struggle to achieve a bare-bones, no-frills standard of living.

By comparison, Sarasota County looks like a glimmer of hope in the latest report from the United Way ALICE Project (ALICE stands for asset-limited, income-constrained, employed). But local United Way leaders point out that population growth has made the challenge larger here in real terms. And some regions of this affluent county are on a par with statewide levels, or even worse.

“We all know where the hot spots are,” said Sue Wetzel, Sarasota area president for United Way Suncoast. “Speaking on behalf of the United Way, the ALICE population is where we prioritized our efforts in the area of financial stability. The other nonprofits and foundations in Sarasota County measure success extensively against the ALICE report as well.”

The newest analysis, released Wednesday, exposes an economic divide in Florida’s population that runs like a river through every single county. Unlike the federal “poverty line,” widely said to underestimate the effects of hardship, the ALICE Threshold is defined as a “bare-minimum” survival budget based on local costs for housing, child care, food and other nonnegotiable necessities. The share of struggling families, according to data for 2016, ranged from a low of 26 percent in St. Johns County, south of Jacksonville, to a horrifying high of 70 percent in Glades County, which borders Lake Okeechobee.

“It’s clear from the latest ALICE report that Florida lawmakers need to focus on policies that will help boost household incomes and foster economic mobility for all Floridians,” noted Holly Bullard, chief strategy and operations officer at the Florida Policy Institute in Orlando. Bullard serves on the ALICE research advisory committee, and was formerly the regional director for financial stability initiatives for United Way Suncoast.

“Investing in affordable health care and housing and quality schools will help improve the quality of life for Sunshine State families, nearly half of whom are struggling to make ends meet,” Bullard added.

The report draws on data from 2016, so it is not a snapshot of the current situation. Nor does it capture all the subtle fluctuations over time that bring families above and below the point where they’re breaking even. But for local United Way leaders, the trend lines since 2010 square with what they see on the ground. In the six-year period, while Florida’s percentage of ALICE households barely budged, Sarasota County’s went from 43 percent to 37 percent, while Manatee’s percentage dropped from 46 to 42, then went back up to 44.

Stephanie Hoopes, director of The ALICE Project for 18 states, noted that Sarasota County’s trendline suggests some “good things going on.” But she pointed out that amid a population increase, “the number of households below the ALICE Threshold fell only slightly — from 71,135 households in 2010 to 66,120 households in 2016.”

And in real terms, the county had roughly 3,000 more families living on the edge in 2016 than it had two years before.

According to United Way of South Sarasota County, local tourism jobs pay an average of $11.12 an hour — far short of the $27-an-hour minimum necessary to reside here.

In Florida’s service economy, low-wage work predominates, with 67 percent of all jobs paying less than $20 an hour. Meanwhile, the state’s cost of living rose by 20 percent from 2010 to 2016.

“The trend for the state is more typical of what we are seeing across the country,” Hoopes said. “With low unemployment and increased productivity, many are surprised that there has not been more improvement for ALICE families. Our research shows that the cost of basics continues to increase faster than wages, especially in low-wage jobs.”

One “must-have” that this year’s ALICE report added to the budgets of working families — a cell phone plan — reflects that added financial pressure.

Bronwyn Beightol, Manatee area president for United Way Suncoast, explained that the report’s primary goal is “making sure that we understand — without bias — why our families are struggling, and what we can do as individuals, employers and policy makers to make a difference. What we’re most excited about is that our major leadership organizations are taking the ALICE report to heart.”

Wetzel and Beightol agreed that recent efforts by United Way and other philanthropies in Southwest Florida to boost student literacy rates, along with robust family support initiatives, may not be showing up in the 2016 data.

“People may not draw that line to how we invest in our children,” Beightol said. “Investing early and often in our children’s education will change the trajectory for them, and create a community that we all want to live and work in.” 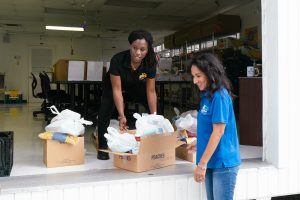 On any regular Wednesday at the Manatee Elementary School Feeding... 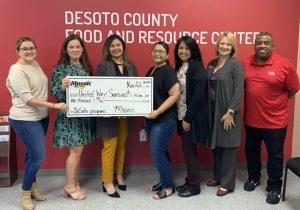